Justine Sacco, PR exec for media conglomerate IAC, was not surprisingly terminated from her job after tweeting” Going to Africa. Hope I don’t get AIDS. Just kidding. I’m white!”

Unbeknownst to Sacco, while she jetting across the world, so was her tweet.  It was re-tweeted until it hit the mainstream media causing a firestorm she wasn’t even aware of until she landed.  Of course, when someone does something as, well stupid as this, the fallout is inevitable.  First the a disassociation by her employer that her comments don’t represent the company; then an over the top apology from the tweeter (hoping it will all go away); and then the firing.  All of which happened in a matter of hours.

What surprises me about Ms. Sacco and this entire escapade is not that she (whom admittedly I don’t know and never heard of) made such a crude and idiotic comment, but how people with such little common sense and professionalism are given PR jobs at high levels.  If anyone should have known the power of the internet, especially when someone says stupid things, it should be a PR exec, right?  Further, when the story broke people started digging into her past tweets and found such doozies as: “I had a sex dream about an autistic kid last night,” and  “I can’t be fired for things I say while intoxicated right?”  Her profile statement on her now defunct Twitter account described her as “Corpcomm at IAC.  Troublemaker on the side.  Also known for my loud laugh.”

Is this woman in third grade?

It is disturbing that major corporations entrust their PR to people who not only lack common sense, but who are clueless about the media their are supposed to master.  And certainly making it all the worse is that she would actually harbor those sentiments and say those things that are about as insensitive and cruel as one can get.

I have to believe that if someone at her company wanted to dispatch that tweet, she would jump up and prevent him/her from hitting the send button.  It’s bad PR she would counsel.  But when she is walking through an airport, presumably thrilled to be making this trip, she leaves her professionalism and common sense at the gate and acts like a giggly kid snapchatting with a a classmate.

Sacco hurt more than her career, she hurt the entire PR profession.  We are in a never-ending batter for credibility with the media and our clients who put their faith and trust in us.  For someone to abuse the very medium she is supposed to understand will have repercussions far greater than her now defunct career.

When attorneys meet one another in court, it is war.  Yes, civility reigns supreme, but nevertheless, the objective is to win the case.

With so many hours to fill, and so much content to create, media have become more and more interested in covering court cases.  Aside from headline news, many programs have sprung up such as “48 Hours Mystery” that follow cases deemed particularly sensational.

So what does this have to do with PR?

However, they don’t always get to the people they want to talk to and often have to settle for attorneys and PR reps.

While many attorneys are experienced in dealing with the media, some don’t understand the advantages of engaging a PR representative on their behalf.  After all, if they are speaking to the media, what does the PR person do?

The answer is the PR person serves multiple purposes.  First, they know the media and can develop a media strategy on behalf of the attorney and the case(s) they are involved in.  Perhaps most important, they can be on the front lines taking media inquiries before the attorney schedules an interview.  This is extremely helpful in that the PR rep can find out what information the reporter is seeking and help the attorney prepare for the interview.

This is not to say PR people help craft misleading messages.  Reporters are far too smart for that.  Rather, it simply gives attorneys some breathing space and some time to think about the interview before picking up the phone and being hit with a barrage of media questions.

Over the years we have represented numerous attorneys involved in a wide range of cases.  Our role has been to help prepare lawyers for media interviews.  We don’t tell them what to say, and wouldn’t try to advise an attorney on legal strategy.  But we are helpful in preparing our attorney clients for interviews so when they do sit down with a reporter, they feel more comfortable and confident.

When is it appropriate for heads of state to have a bit of fun?

Not a funeral service, apparently.

When President Obama attended the funeral service for Nelson Mandela, he along with Denmark’s Prime Minister Helle Thorning-Schmidt and UK Prime Minister Cameron got together to mug for her iPhone.  In the language of teenagers, it is called a “selfie,” a self-portrait that is usually meant to post instantly on social media

The picture of these powerful world leaders crowding together made for an even greater picture.  Adding to the excitement, was Obama’s wife looking away and very stern. Every man of dating age knows that look of utter disapproval.

Almost as fast as the picture spread across the world, the photographer who took the shot came to the defense of the three leaders.  He discounted that it was inappropriate or immature.  He said it was during a time of “celebration” and not a somber moment.  According to him, he thought nothing of it at the time he snapped the shot.

Well, he thought enough of it to send it around the globe.

This bit of levity is another reminder of the power of the internet and how nothing and nobody is anonymous anymore.  It seems that every human movement is caught on video by someone, someplace.  Certainly, world leaders should be cognizant of the fact that they live in a proverbial fish bowl and need to be more careful.  But one has to believe that if they engaged in what many are calling childlike behavior at a somber event, they collectively had to believe it was not inappropriate and not childlike.

Or maybe they just didn’t care.

Defenders of the pic have also come forth to discount that the First Lady was upset, explaining that the camera just caught her in moments when she looked angry, but really wasn’t.

My take on the “selfie” is that if you’re a world leader, and you want to act human, do it in a room and make sure the only camera in the room is the one pointed at your face. 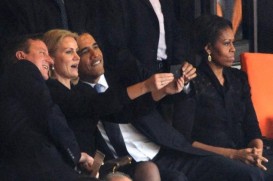