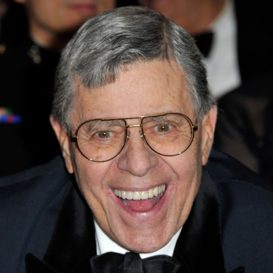 The day after Jerry Lewis died, the world went dark.

Yes, it was a coincidence, that the solar eclipse happened the day after, but a telling one.

Jerry Lewis had to have been one of the most famous people in the last 100 years.  Who doesn’t know Jerry Lewis?  Whether you remember his movies, his act, his interviews or his telethon, we all knew Jerry Lewis.

Jerry Lewis devoted his entire life, until the day he died, to making people laugh.  He also devoted it to raising money for MDA to help children afflicted with Muscular Dystrophy.

Yes, he had a snarky side. He had a larger than life, somewhat annoying ego, but he earned it.  Nobody comes from a poor Jewish neighborhood in New York and catapults himself into the most famous funnyman in history without being somewhat eccentric.

When we lose someone we all love and admire, like Dick Gregory a few days prior and now Jerry Lewis, we tend to say the same things — there never will be another one like him.  H/she was one of a kind, and all those platitudes.

In the case of Jerry Lewis, it is true.

All of us want to be loved.  Well, at least liked.

This is apparently no more the case than with our president.

President Trump is obsessed with what people say about him; what people think of him and his popularity.  This is not a political statement.  He has admitted it and displayed this obsession by watching what seems to be countless of hours of cable television to see what the media say about him.

Obviously, much if not most of it, is not good.  So how does he change that?  How does President Trump manage his own PR so he markets himself in a way that will improve his likability and make him happy?

There is only one way, and it is not through polished statements read off a teleprompter.  (Not his strength.)

The President needs to stop worrying so much about his image and start getting things done.

Certainly much of what he wants to get done people disagree with.  I won’t rehash the list, but we know what they are.

He also needs to remember that presidential criticism is part of the job.  There has never been a president when everything he did received 100% approval.  Maybe Trump is facing more of an uphill battle than prior presidents, much because of his own doing, but he needs to swallow it and roll up his shirtsleeves.

So if he can, and that is a big IF, he should turn off the TV and get to work.  Americans want a better life, not someone who can deliver a pretty speech.  Doing both is better, but people will take what they can get.

And right now, people aren’t asking for much.  They just want to pay their bills, raise their families in peace and have the dignity of a job.

If he can do that, his PR and image will rise.

IF he can do that.

In today’s divided country and world, it is a breath of fresh air when there is something we all can agree on.

And it happened today.  The solar eclipse was cool.

For a few hours, people stopped fighting with one another, writing hateful messages and levying threats.  Even the media made room for the one event that everybody in the world could witness on the same day, with or without those special glasses.  And it had nothing to do with politics.

Maybe that’s what we need more of.  Natural occurrences that are undeniable and that we all can witness at the same time and agree upon.

Hopefully something like this will come along again before another 100 years or so.