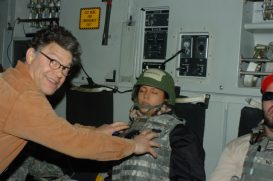 The old saying “a picture is worth a thousand words” has never been more true than with the situation with Sen. Al Franken.  Caught in the middle of the avalanche of allegations of sexual improprieties, Franken tried having it both ways.  His initial statements were that he respected the rights of women to express their feelings, while at the same time saying he didn’t remember events as they were portrayed.  He said he wouldn’t resign and keep working for the people of Minnesota.

Then the picture appeared.

While he tried to hang on to his job and senate seat, the infamous photo that he took before he became a politician haunted him.  It was everywhere and he couldn’t escape it.  One has to wonder if he hadn’t taken that disgusting and not very funny photo, whether he could have weathered the storm and hung on.  But photographic evidence, especially a picture as blatant and posed as this one, was more than he could withstand.

Photography and video are powerful instruments, perhaps the most powerful we have next to in-person statements.  The world has changed — for the better and sometimes for the worse — because everything we do seems to be caught on camera.  If there aren’t security cameras mounted on building rooftops capturing our every move, there are a dozen people with cell phones who will.

This new reality has made the world a bit safer. It has helped law enforcement catch and identify criminals.  And today, it brought down a sitting United States Senator.

In the public relations business, we promote and encourage clients to use photos and video.  Let’s face it, people have short attention spans and always prefer looking at a photograph than reading a story.  It is faster, easier and shows what really happened.

When marketing a product or business, the use of pictures and video is a must.  It cuts right to the core of messaging.  Photos that are not too arranged or Photoshopped, display the truth more than words ever can.  Sen. Franken discovered that today when he lost one of the most powerful jobs an American can hold.

Maybe if he goes back to comedy, he will think twice about doing something so foolish and denigrating, and think a second time about having it caught on camera.